What is A Serial Killer? 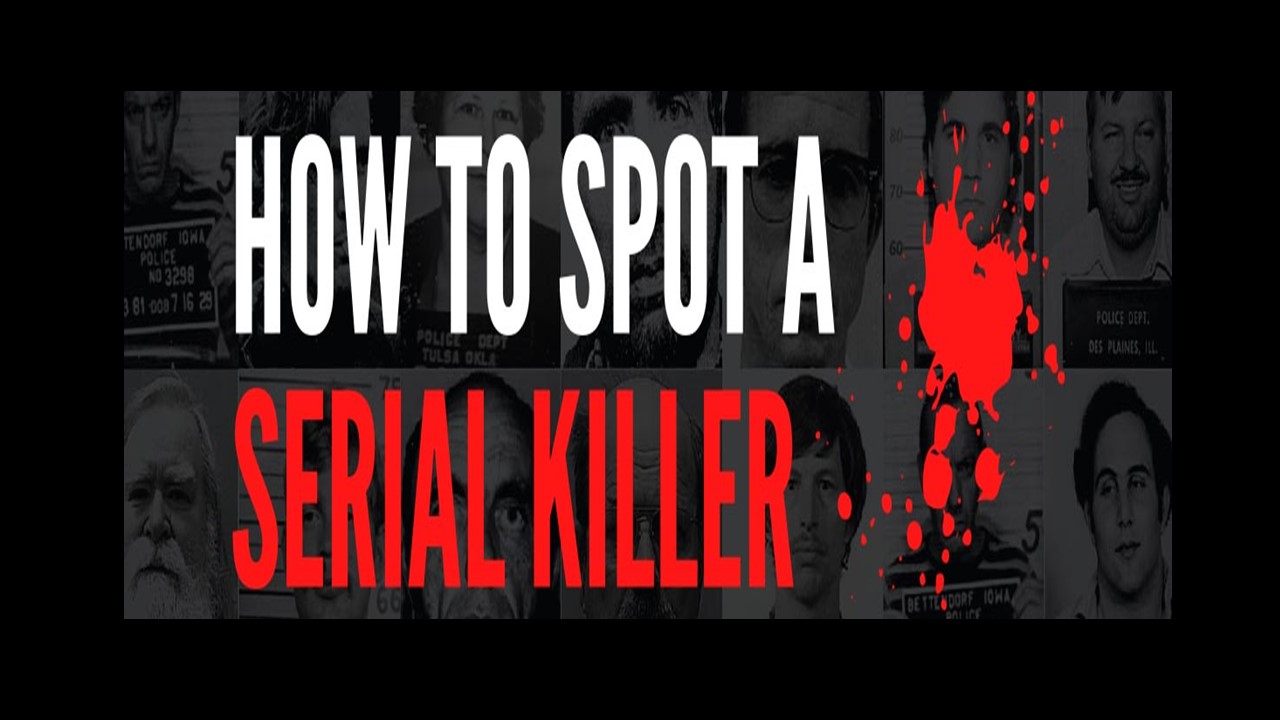 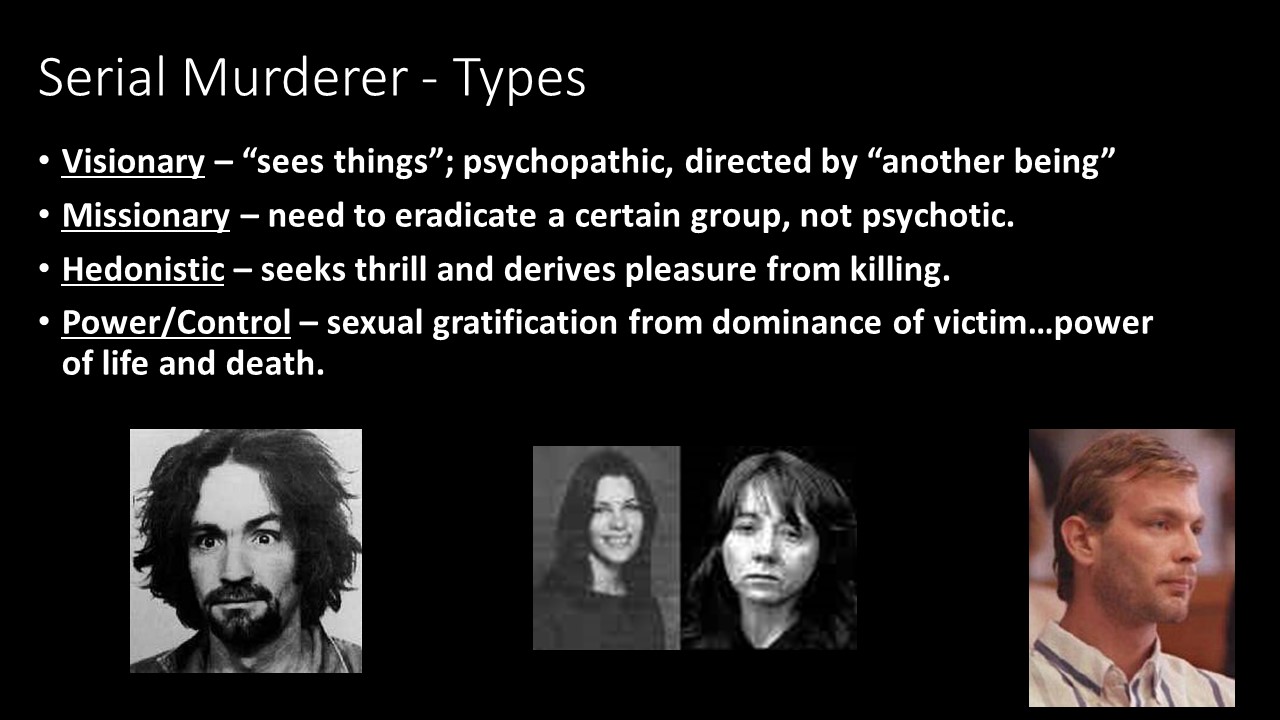 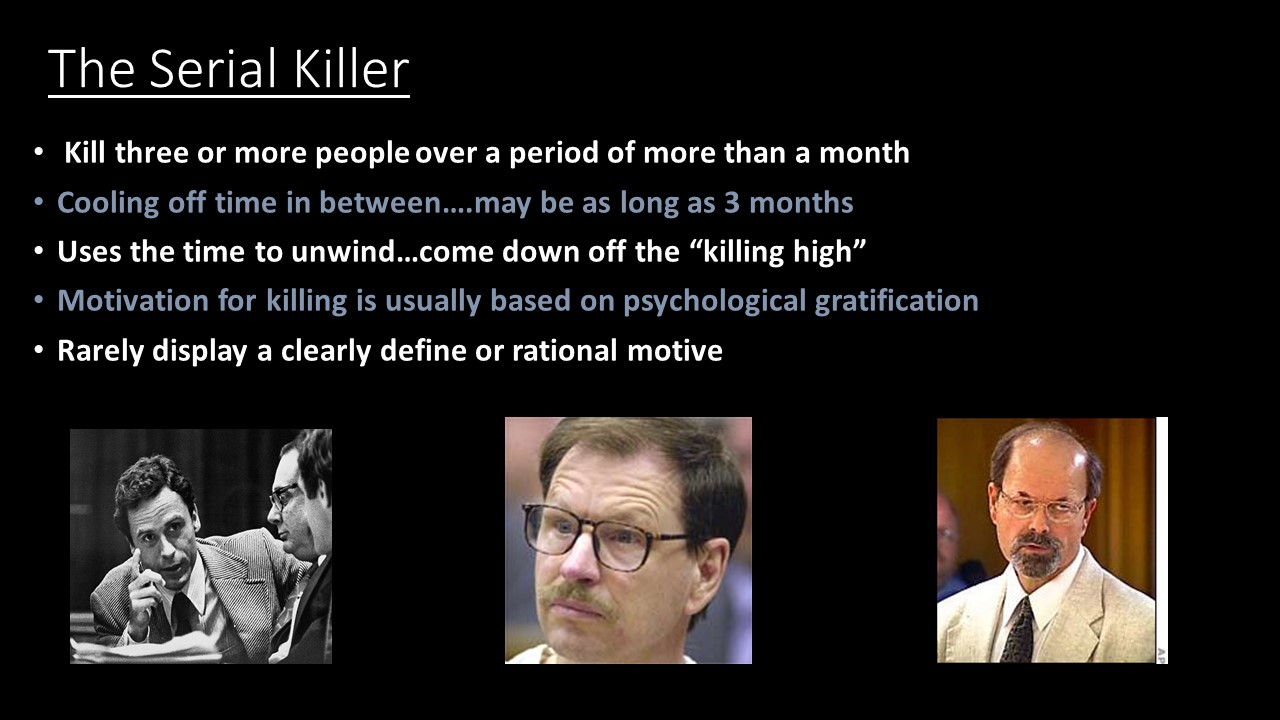 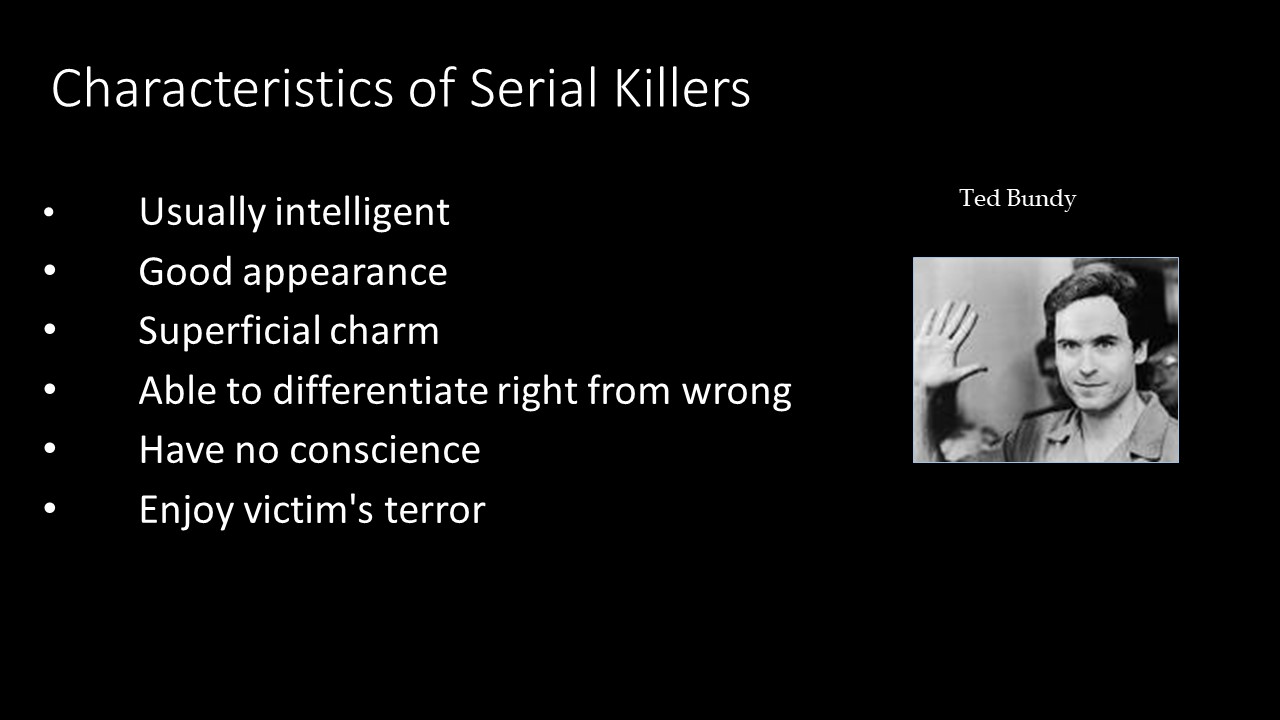 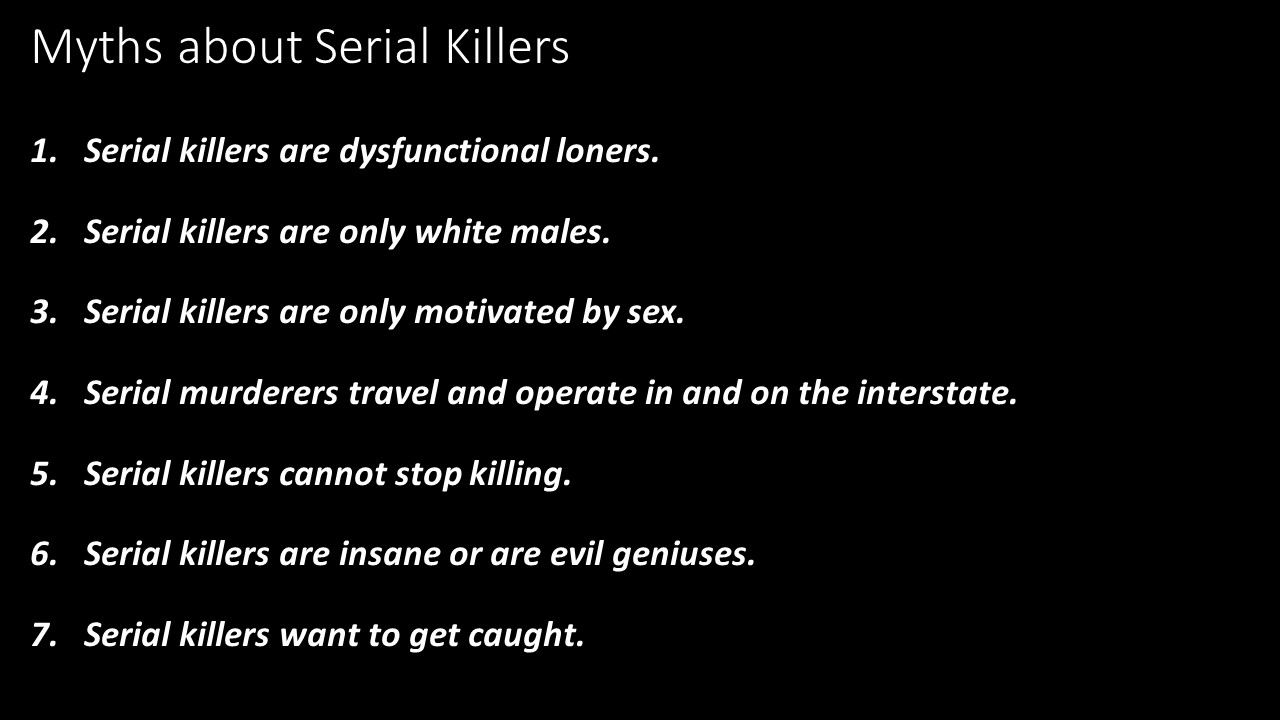 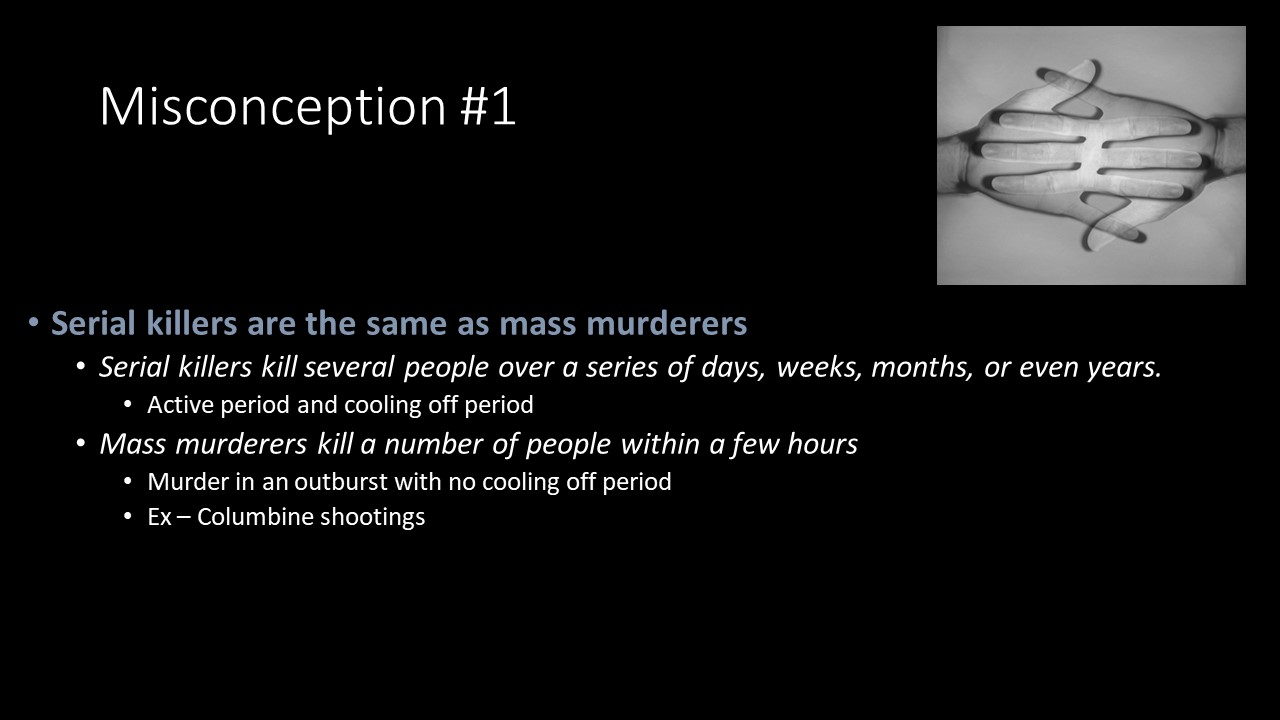 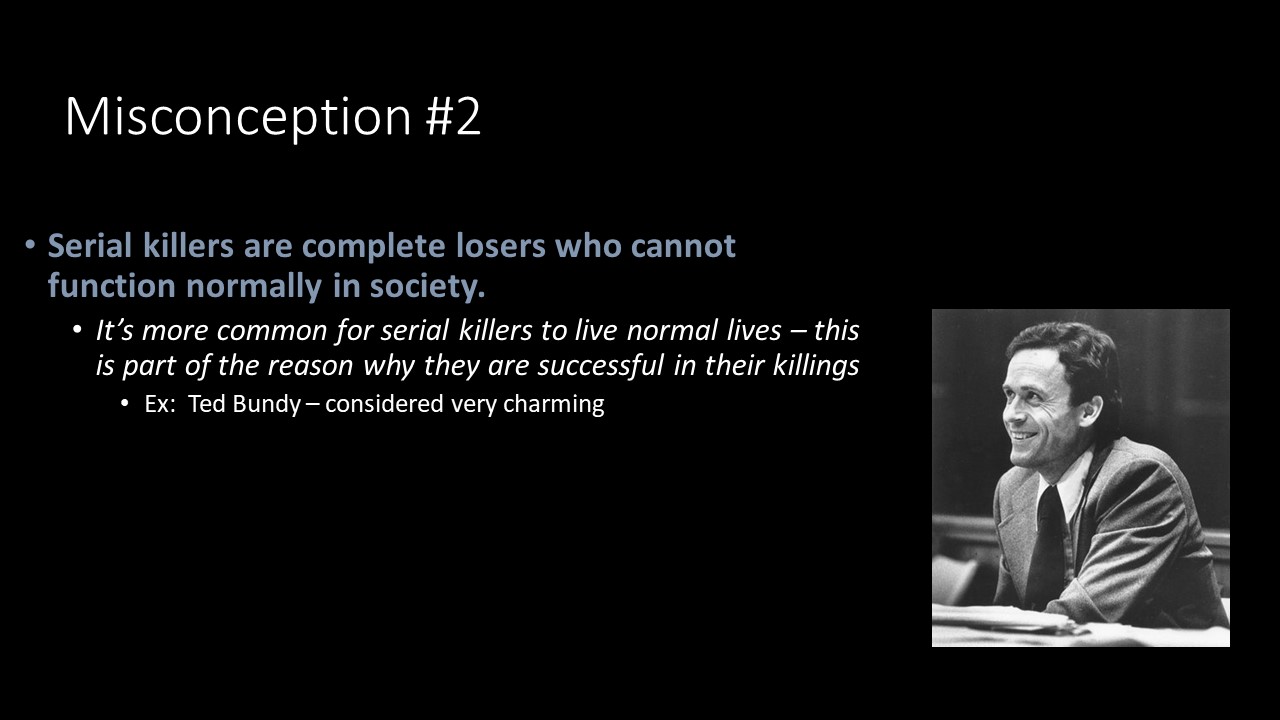 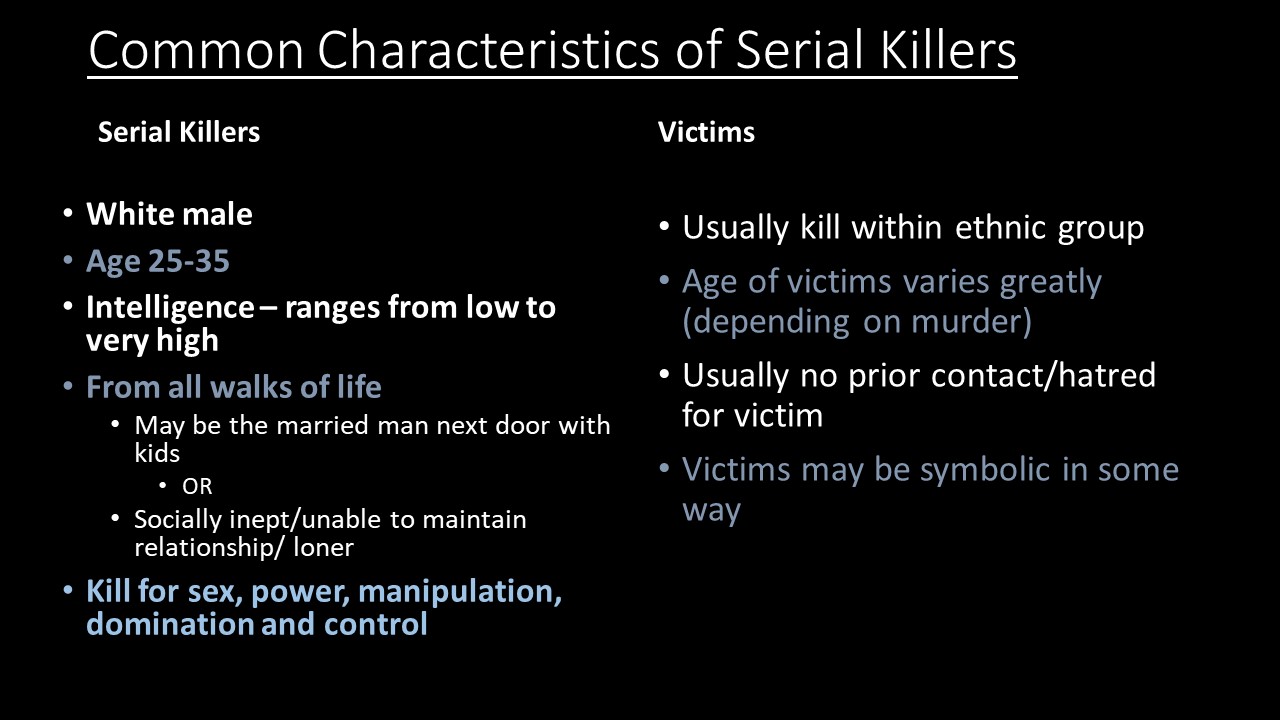 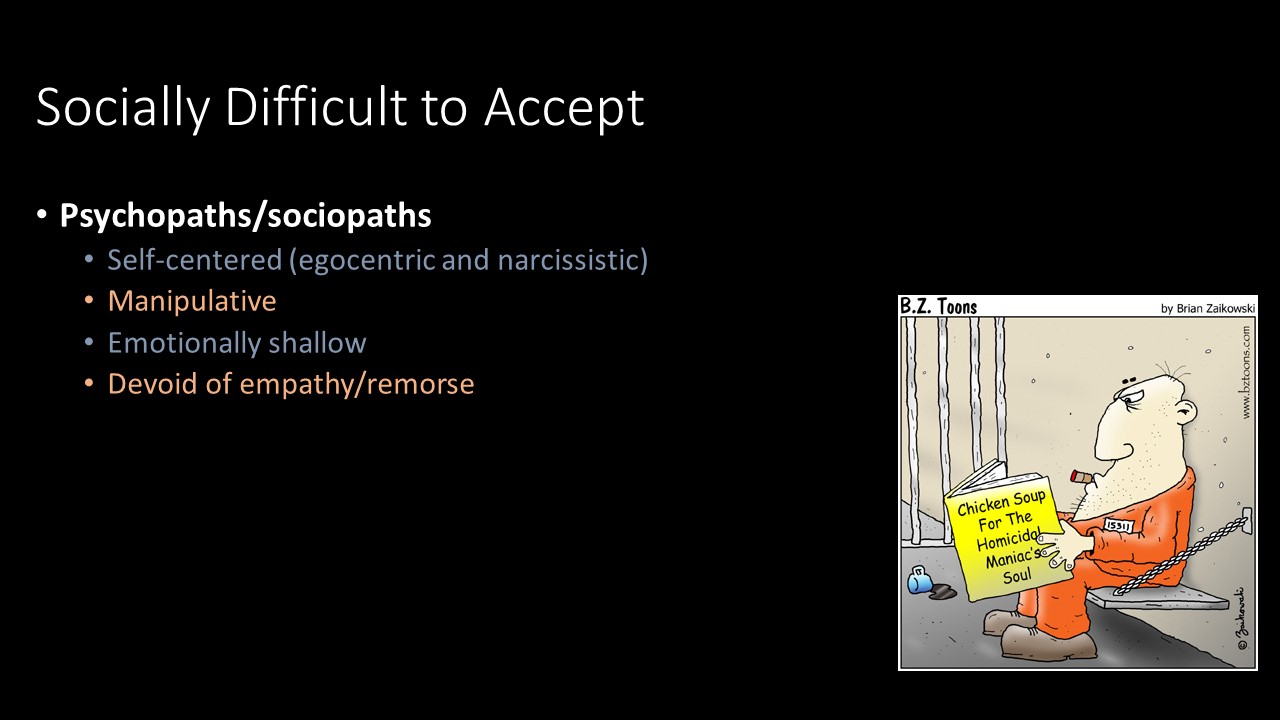 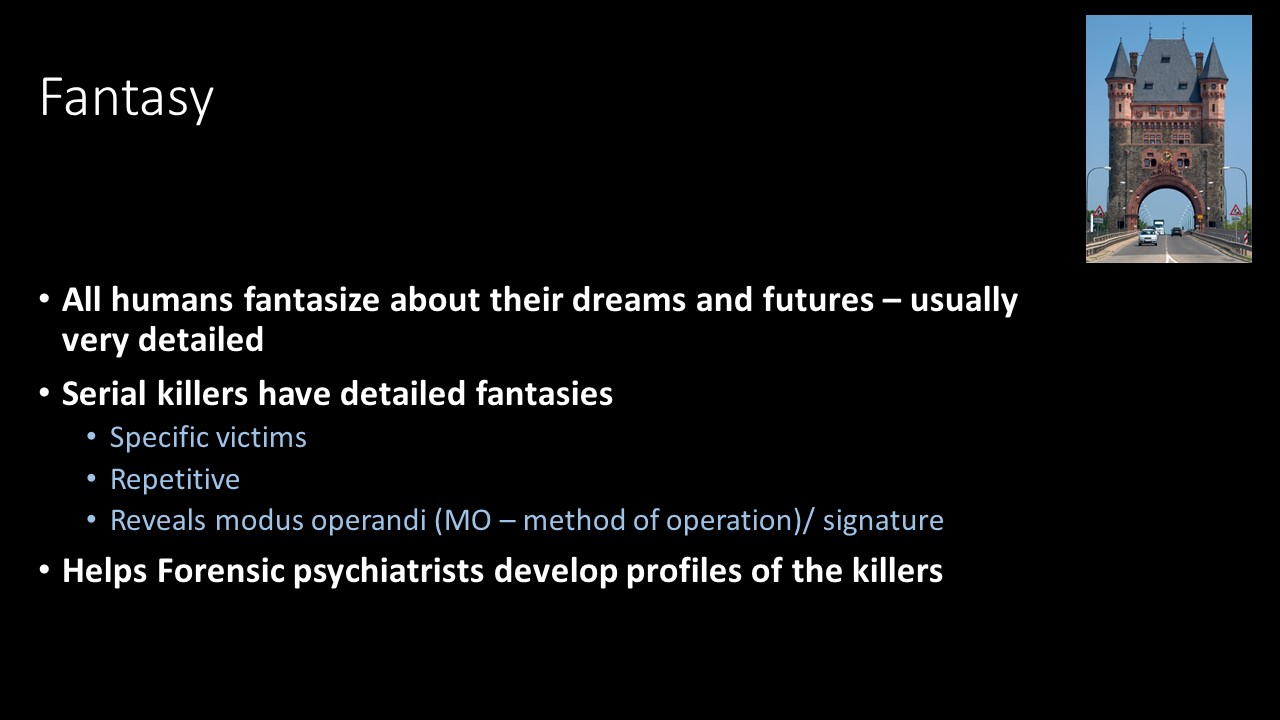 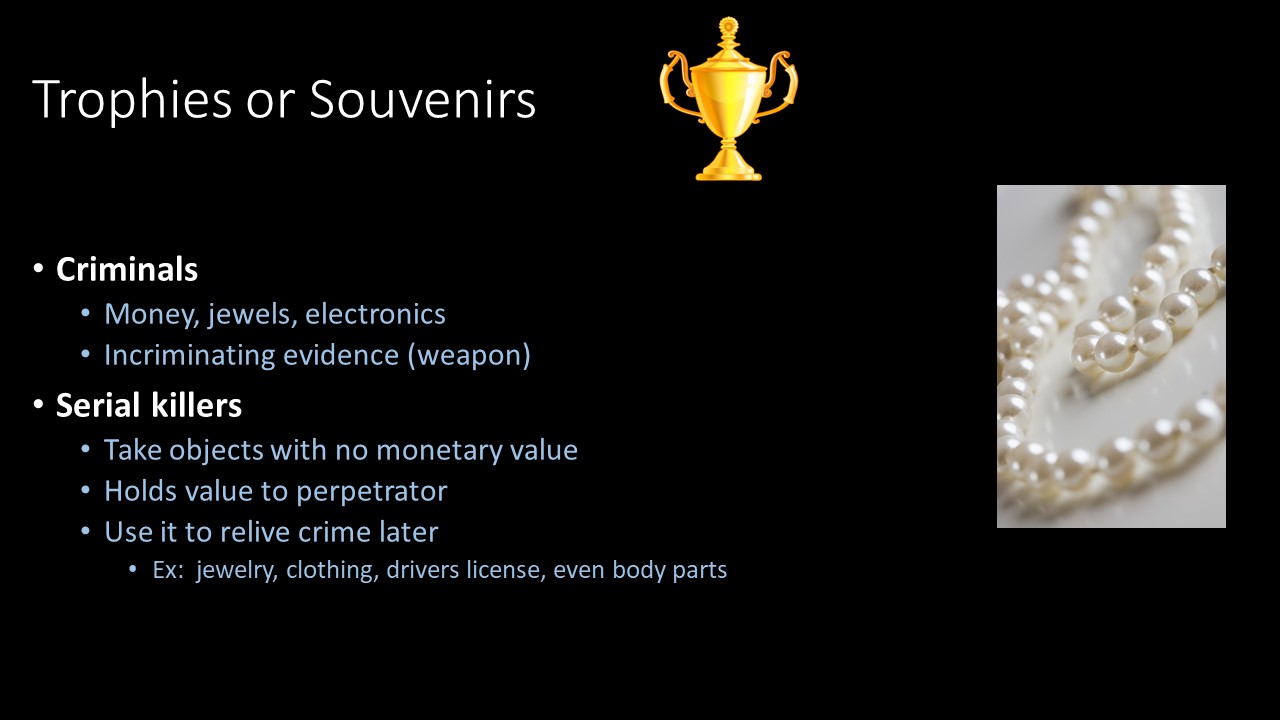 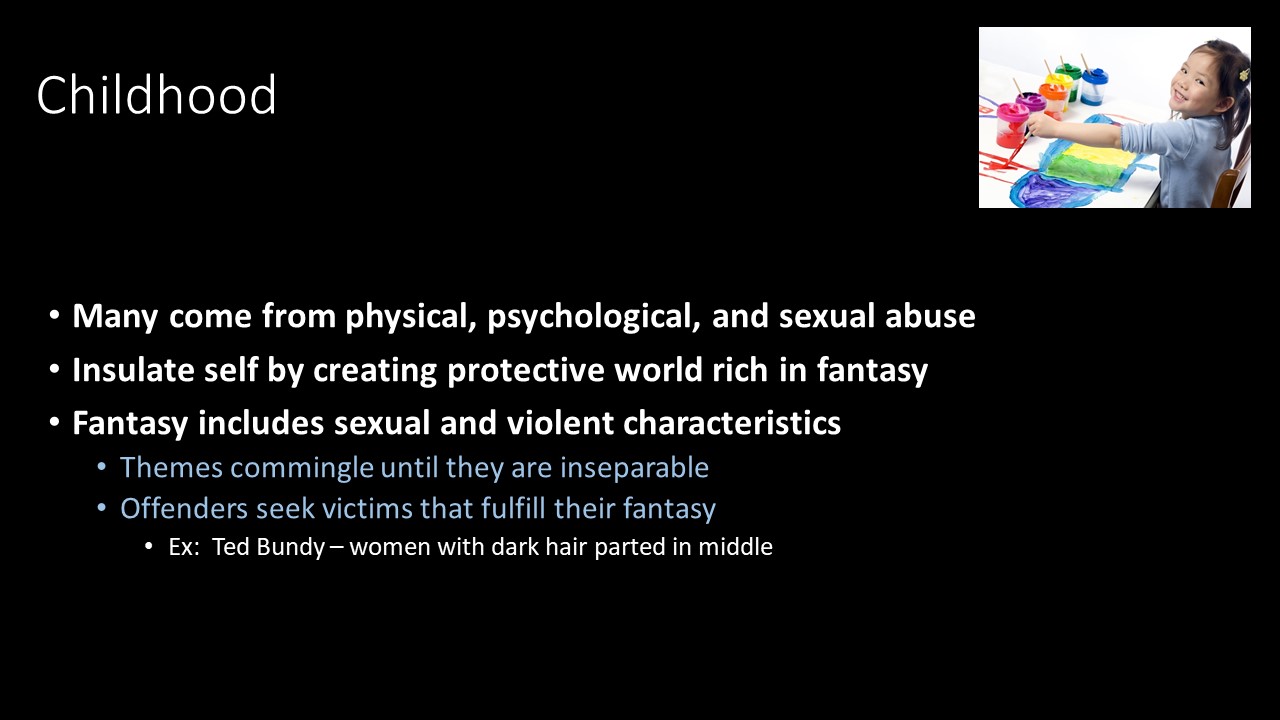 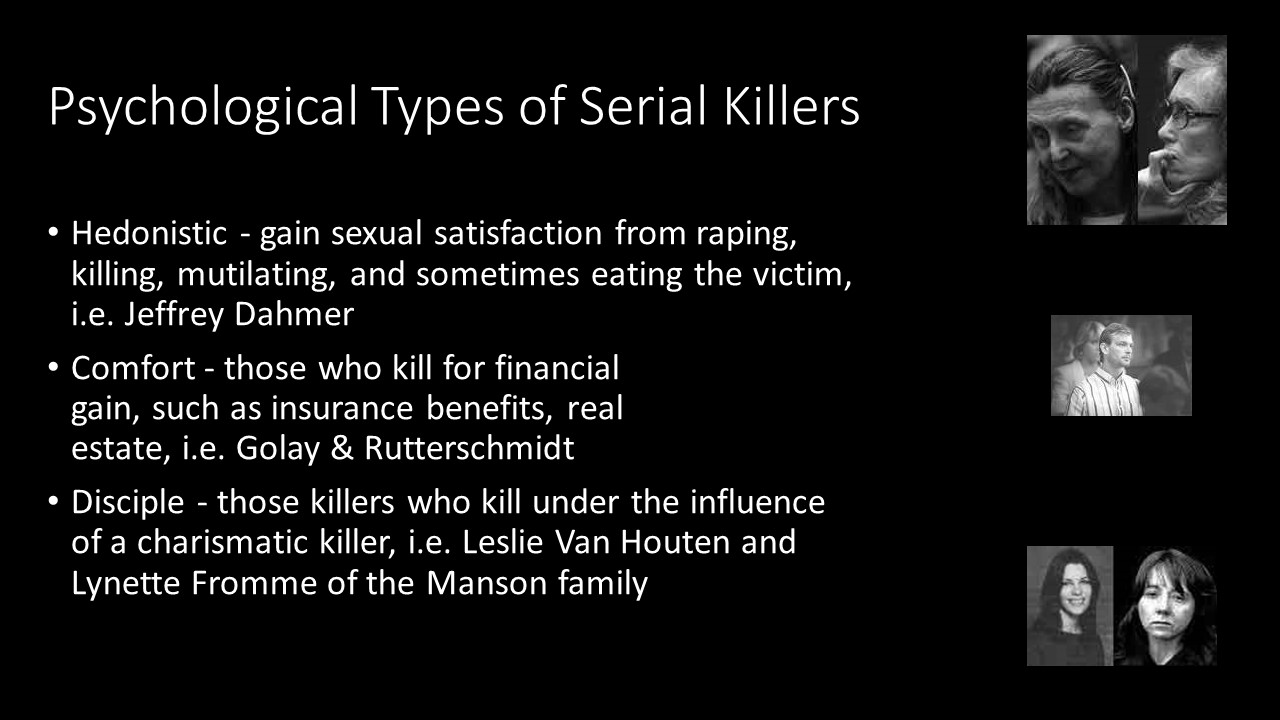 What Defines A Serial Killer

A serial killer is conventionally defined as a person who murders three or more people in a period of over a month, with a “cooling down” time between murders. For a serial killer, the murders must be separate events, which are most often driven by a psychological thrill or pleasure. Serial killers often lack empathy and guilt, and most often become egocentric individuals; these characteristics classify certain serial killers as psychopaths. Serial killers often employ a “mask of sanity” to hide their true psychopathic tendencies and appear normal, even charming.

The phenomenon of serial killings has been recognized since a man dubbed "Jack the Ripper" murdered seven London prostitutes in 1888.  The FBI terms serial killings as serial murders and as the killing of several victims in three or more separate events.  These may occur several days, weeks, or years apart, and reveal similarities of pattern, such as where the murders occurred, the type of victim, or the method of killing.

From the Dictionary of Criminal Justice 4th edition by George E. Rush.

Its’ not easy to identify future serial killer but here are some traits can detect traits of a serial killer.

One of the oldest questions in Criminology is “Are Criminals Born or Made?”

Many serial killers are survivors of early childhood trauma of some kind – physical or sexual abuse, family dysfunction, emotionally distant or absent parents. Trauma is the single recurring theme in the biographies of most killers As a consequence of this trauma, they suppress their emotional response. They never learn the appropriate responses to trauma, and never develop other emotions, which is why they find it difficult to empathize with others.

Research shows that certain genes can predispose people to violence. Many serial killers experience childhood trauma or early separation from their mothers. As a consequence of that trauma or separation, scientists believe, they learned to suppress empathy or suffered damage to the areas of the brain that control emotional impulses. Serial killers often are loners who fear all relationships and seek to control, to destroy other people to eliminate the possibility of another humiliating rejection. Those who've studied serial killers believe that many are at least partly motivated by the attention and fame that mass media can provide mass murderers.

Clicking on the names below will uncover short biographies of each of these infamous serial killers.

Insider's 17 Most Notorious Women Serial Killers
While not a comprehensive list of women serial killers, this website lists the names and stories of 17 that you can peruse and choose to research further.
Women on Death Row
Watch video interviews with investigators, news anchors, and appeals prosecutor of the time of the conviction describe the series of events and Buenoano's changing stories. This video features court video and prison interviews with Judy
Crime Museum: Judy Buenoano
For those interested in reading a more detailed summary, and possibly explore other crime articles, this website is perfect! 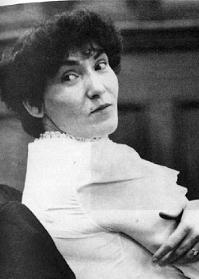 Encyclopedia of Alabama: Nannie Doss
Summarizing the murder of all of her husbands, this encyclopedia explores how the seemingly sweet Giggling Granny Nannie Doss got convicted and avoided the electric chair.

View interviews with Aileen Wournos, the woman who is credited with being America's first female serial killer, speaking about her motives and eagerness for the electric chair. Wanted to know what it was like for those around Wournos? The District Attorney and  her lawyer, who helped her get to her goal of execution, speak about the legal proceedings. This primary resource is perfect for audio/visual learners and those interested in hearing directly from participants.

To support the primary source above, this website reviews Aileen's life and crimes by victim. Interested in more capital punishment? This is a great place to expand your research!

"No one knows for sure why a serial killer will choose a certain individual as their victim. When asked why, serial killers often give a wide range of answers regarding the reasons for their murders. The most common belief is that the killer wants to feel complete control over another person. They thrive on the fear their victims display and see the murder as the ultimate form of dominance over a human being.

"In order for any person to be defined as a serial killer, they must satisfy a few criteria, specified by the Federal Bureau of Investigation. The person in question must have murdered a minimum of three individuals (not simultaneously), there must be a period of time in between the murders (to prove that multiple victims were not killed during a single fit of rage), and the circumstances of each murder should indicate that the killer felt a sense of dominance over the people they have killed. The victims must also be vulnerable to the killer in some way, a characteristic which indicates that the killer has sought to achieve a feeling of superiority.

"Many experts agree that serial killers have a vision in mind of their victim. This person would be thought of as their “ideal victim” based on race, gender, physical characteristics, or some other specific quality. It is rarely possible for the killers to find people who meet these exact qualifications, so they generally seek out people with similar traits. This is why serial killings often seem to be completely random at first – each victim may have something in common that only the killer easily recognizes.

"It is generally accepted that most serial killers feel a strong urge to commit acts of murder. They are, however, thought to be extremely cautious people who will not choose a victim unless they feel the chances of success are very high. For this reason, the first murder victim is very often a prostitute or homeless person, someone the killers can attack without drawing a lot of attention. These factors make it even more difficult to establish patterns in a series of slayings and to track down the responsible culprit."

In addition to famous cases that have been covered by the media throughout the ages, the FBI has also made a note of their famous cases and criminals. Their list includes Organized Crime, Violent Crimes, Bank Robberies and a historical look at the Ten Most Wanted.

Not a scholarly resource, but can provide basic background information on Serial Killers. A good place to start.

This site will provide lot of background information on a variety of Serial Killers. This would not be considered a scholarly resource.

A comprehensive list of known serial killers in America.

The four main types of serial killers based by the type of crime they commit are as follows: thrill seekers, mission-oriented, visionary killers, and power/control seekers. Thrill seekers are serial killers that see outsmarting the law as some sort of amusement.

There have been 220,000 unsolved murders in the U.S. since 1980. Are serial killers to blame? Here is everything you need to know: