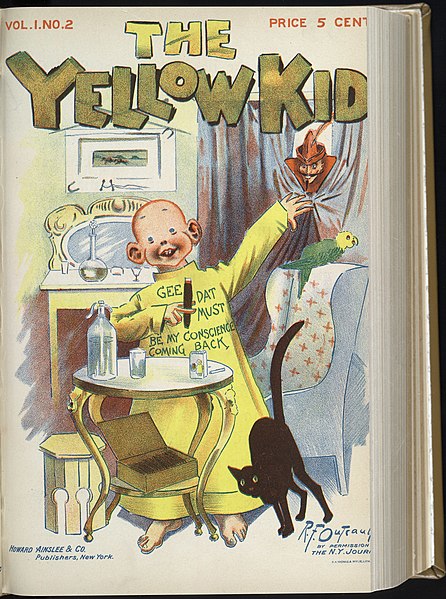 The first comics were published in strip formats in newspapers and the first comic, published in 1894 in The New York World, was Hogan's Alley. The most popular character in this comic was a boy in a yellow smock dubbed The Yellow Kid, whose dialog would appear on his chest as the panels changed.

He was so popular that The New York Journal (The New York World's biggest rival) hired away Hogan's Alley creator Richard F. Outcault to make a Yellow Kid comic for them. The sensationalistic (and often untrue) headlines favored by both papers would later be dubbed "Yellow Journalism" in honor of the comics.

The first comic books were reprints of the newspaper strips. It would be decades before original material was published in a comic book form. The first of these was 1929's The Funnies. This is how comics came to be known as "the funny pages."

The Yellow Kid image is released Free of Copyrights under Creative Commons.